The Ukrainian sector of the Black Sea encompasses parts of several major tectonics elements, including: 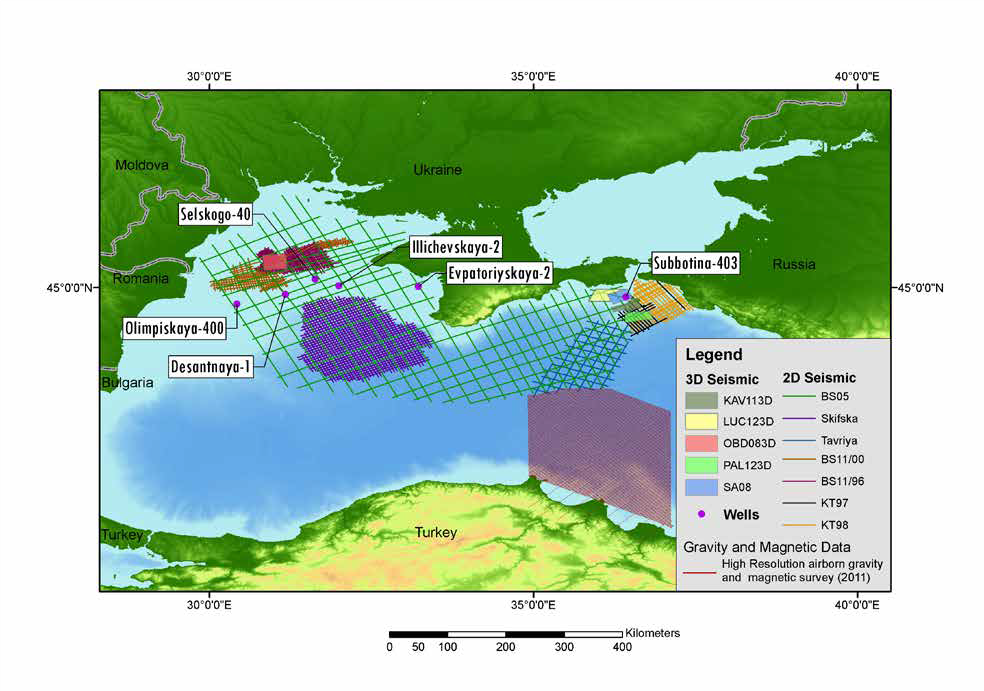 The East European platform is comprised of Pre-Riphean basement which dips southwards and is overlain by Palaeozoic, Mesozoic and younger sedimentary cover. The basement surface subsides southwards to depths in excess of 5000 m. Within the sedimentary cover there are generally north-west trending local structural highs and depressions.Within the Scythian Plate a number of tectonic elements are defined, including the Kiliysko-Zmeinoye High, Karkinitsky Trough, Gubkin Ridge, Kraevaya Spur, Kalamitskoye High, and the Lower Danube Trough. Strike-slip faulting enhances the structuration of this region, part of which lies within the area covered by this recent seismic data set.

Further to the south and west, the Moesian Platform is characterised by a thick and undeformed Palaeozoic-Mesozoic section, with a thinner Tertiary cover. The platform extends offshore from Romania and Bulgaria, into the westernmost sector of the Black Sea. The Moesian platform extends offshore towards the deep West Black Sea Basin, and could well have formed a major source of clastic sediments into the basin, during the Late Cretaceous and Tertiary.

The present Black Sea morphology has been produced by the coalescence of two basins, during their post-rift phases. Both formed as back-arc extensional basins, north of a northward-subducting oceanic plate – the Tethys Ocean. The northern part of the present-day Black Sea Basin, which lies within the limits of the Ukrainian offshore zone, is divided by the Andrusov Ridge (Mid-Black Sea High) into the West Black Sea and East Black Sea Depressions, which are filled with mainly Cenozoic sediments in excess of 10-14 km in thickness.